Mirador del Rio is located on top of the cliffs of Famara, 400 meters of altitude, in the northernmost part of the island from where we can see one of the most spectacular views of Lanzarote. This is a most representative architectural creation of Cesar Manrique.

The tunnel formed by the Corona Volcano is one of the most extensive and interesting in the world. Throughout its travel, there are at least sixteen ‘Jameos’. More than six kilometers from the preface is known volcano crater to which juts into the sea at a stretch a mile underwater means called "Tunnel of Atlantis". 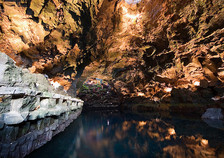 The Jameos, like the Green Caves, is located inside the tunnel produced by the volcanic eruption of the Crown. The Jameos are located in the section of the tunnel closest to the coast. They owe their name to the existence of an inland lake which is a unique geological formation. It arises by filtration below the sea level.

The Cactus Garden is a magnificent example of an architectural intervention integrated into the landscape. César Manrique makes this bold architectural complex of maintaining unbreakable binomial art and nature that permeates all space interventions.

It is located in the town of Guatiza, municipality of Teguise, in the center of an agricultural environment characterized by extensive plantings of cactus cultivated cochineal. 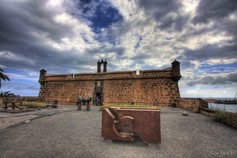 The International Museum of Contemporary Art MIAC is located in the old military fortress Castillo de San José. The museum was established in 1975 to “promote, collect and show” the most significant works of contemporary artistic creation."

In the geographical center of Lanzarote, in a significant crossroad where we can reach any point of the island, there is one of César Manrique creations, the most loaded of symbolic references: the architecture of the Casa-Museo del Campesino and the Monument of fertility. 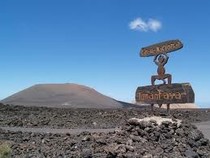 Fire Mountains of Timanfaya or are part of a wide area affected by volcanic eruptions occurred in Lanzarote between 1730-1736 and later in 1824. This long eruptive process, one of the most important and spectacular historical volcanism on Earth, drastically changed the morphology of the island being buried almost a quarter of the same under a thick layer of lava and ash.

El Golfo is one of the few rare examples of hydro-volcanism, volcanic activity occurs near the coast. In the center of the crater, a Lagoon Cycle has emerged. A deep green lake, color produced by the concentration of ‘Ruppia maritima’, a marine algae.

‘Hervideros’ is the name by which is known in the coastal area where you can see the violent beating of the waves on the passages that form the path of the lava into the sea. When the sea is rough it leverages the lava holes and rises to the surface as if it were boiling water.

‘Las Salinas del Janubio’ is a place of scientific interest which also seeks to protect the wildlife, traditional activity in obtaining salt. Prior to the eruptions in 1730 to 1736 it housed the best natural harbor in Lanzarote, but the eruptions created a sand bar which closed the lagoon forming the ‘Caleta del Janubio’. 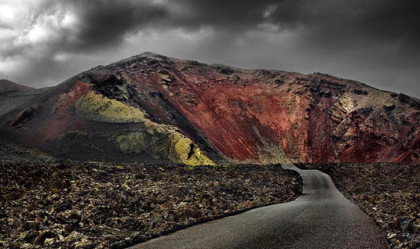