El golfo is an open amphitheater facing towards the ocean and during the eruptions of 1730’s. The lake occupies the bottom of the semicircle arose due to flooding of the crater. Its green color is caused by algae that live on its surface. The volcano consists of porous, which, by the action of time has spectacular formations. The sea passes through the crater forming a beautiful black beach contrasts with the green of the lake, connecting oneself by a subway.

Actually, El golfo is one of the few and rare examples of hydro- volcanism; volcanic activity happens to low-lying levels. In the popular ‘Charco de los Clicos’  you can find the strange olivine, a semiprecious stone from which local artisans design jewelry.

This lake has been declared a nature reserve, so the bathing and swimming is forbidden.

It is located south of the island, in the municipality of Yaiza. A few meters away is the village of El Golfo, where you can enjoy a variety of dining at the oceanfront. 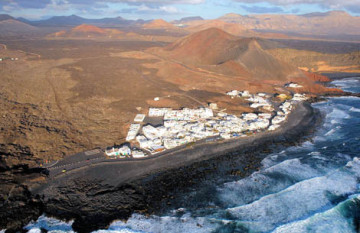 The town of El Golfo 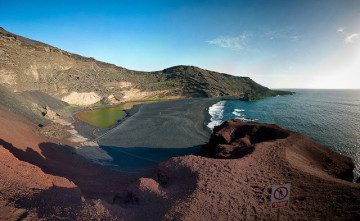